God I hate that commercial where the lady says that. I think it's an AT&T commercial but for the life of me I can't remember right now, even though I've seen it on TV and heard it on the radio like 736 times. I guess my beef is, if you're in a situation where you can't use the word, "fuck", don't bother. Don't replace it with "flippin'", that just sounds stupid. I have to admit I sometimes have used "frickin'" myself which sounds equally stupid and pedestrian. To sum up, if you're in that situation just redo the sentence to say something like, "That's pretty damn fast" or "Wow, that's pretty quick" or the like. Also not accepted is when you ask me a question as a statement. "That's really fast, am I right?" Yes, I guess you're right, why do you need my affirmation?

Now, why is it I still kind of chortle when people say, "Shut the front door!"  I just don't know.
3 comments:

Quote Of The Day

"If all of that past lives and shit really exists than I must have been a serial killer in one of mine cause I sure am paying for something in this round." - Wil Harrison
1 comment: 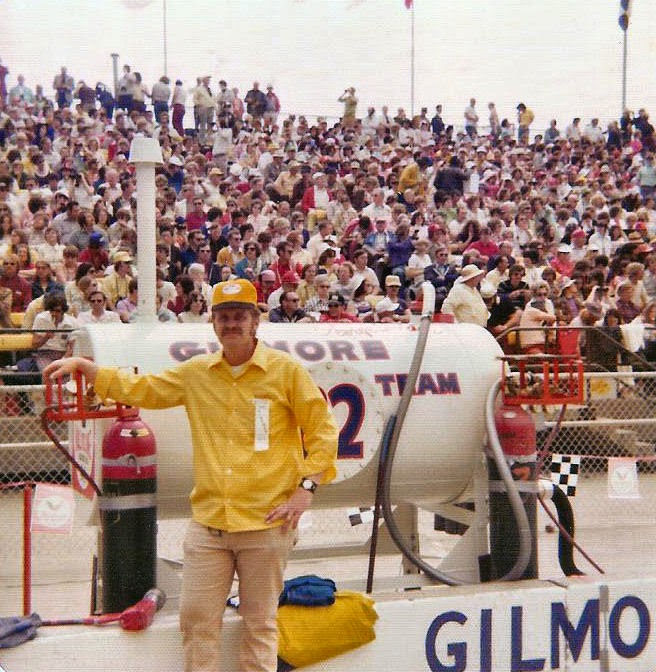 There are a few days in the year when I miss my Father, today is one of them.  Not that I don't miss him everyday but my Dad and I were never what you would call close.  We weren't "pals" or "buddies" or anything like that.  My Dad wasn't a hunter or a fisherman or the like.  We didn't go to baseball games or huddle around the TV on Sundays to watch football.  As I grew up I got into sports much like my friends did.  I loved baseball and hockey, etc.  My Dad was never really into sports at all, could care less.  Except when it came to auto racing.

My Dad loved auto racing.  My Dad was a car guy.  My Dad was a Mopar man.  Now mind you he wasn't so into it that he had a Hemi Charger in the garage and his world revolved around it or something, much to my chagrin.  My Dad liked to watch auto racing on TV and he always had a Chrysler product in the driveway, as do I.  Growing up one of the few things that "bonded" my Dad and I together was racing.  I fondly recall the Sundays back in the early 70's watching Richard Petty battle it out with David Pearson, Cale Yarborough and the boys.  To my eyes and I'm gonna guess my Dad's there was nothing more beautiful than this: 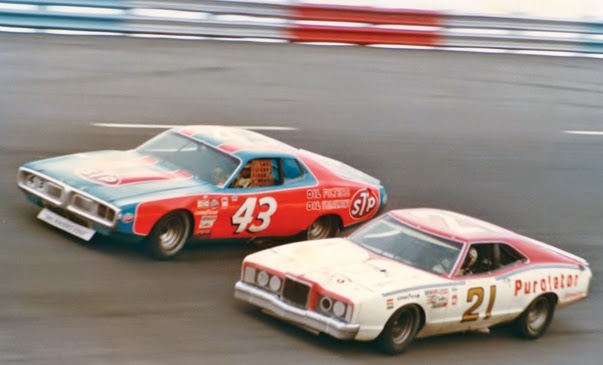 Back in the early 70's my Dad was the fire chief/safety supervisor at an oil refinery here in Chicago.  Somehow, I don't recall exactly how it happened, they and other refinery safety personnel were asked to come to Indianapolis to work safety with the pit crews for the races.  Basically when a car came into pit they would jump out there with the crew and hold a fire extinguisher on them in case anything went wrong.  Mind you they did this only wearing a regular non flame retardant everyday shirt and clothes.  Yes, 70's safety at it's best!  As far as I can remember they weren't compensated anything for this but then again who cares!  What it comes down to is my Dad and 3-4 other guys got to go to the race every year and hang out in the pits!

Back in the early 70's we had a Winnebago which meant we got to go along too a couple of times.  Oh the things I saw as a youth the day and night before the race!  Debauchery abound!  If you've never been to an Indianapolis weekend it's like a scary Mardi Gras.  Anything goes.  Anyway, I digress. 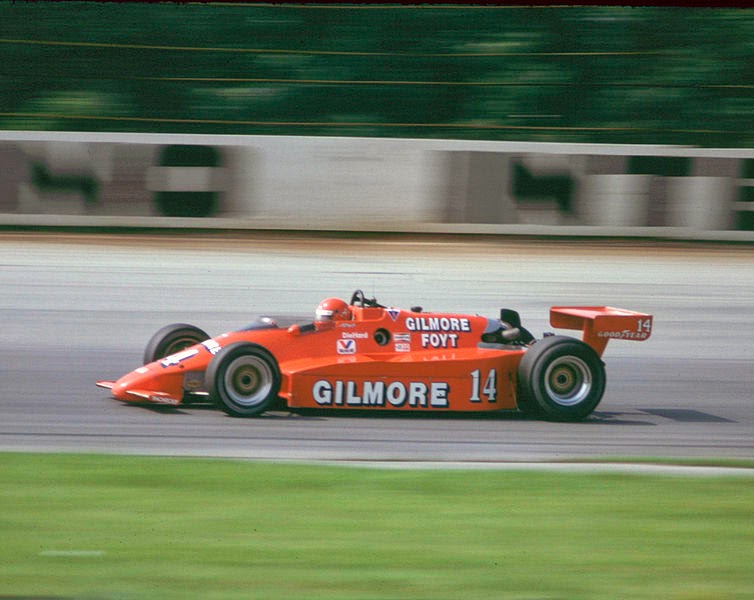 My love for open wheel racing was born.  Men with names like Foyt, Andretti and Unser became part of my youth.  The Indy trips ended in 1980 or so but I will always have the memories.  From then on every year without fail I would be at home in front of the TV on race day.  I knew my Dad would be too.  My parents were divorced when I was 14 and I didn't really see my Dad too much, hence the specialness of a bonding agent such as this.

As the years went by Dad continued to watch NASCAR which I had gone away from.  I got tired of the 37 different sponsor Chevrolets and the cookie cutter cars with restrictor plates to slow them down (WTF?) and all that crap.  I preferred the exploits of Michael Andretti and Paul Tracy and Nigel Mansell!

To finally make sense of all this rambling, auto racing is one thing that Dad and I could share.  As much as were alike we weren't.  I had abandonment issues and he didn't know how to talk to me, or didn't really want to.  I tried my hardest to prove to him that I didn't need him, but when all hope was lost I would have to swallow my pride and go to him for the solution. 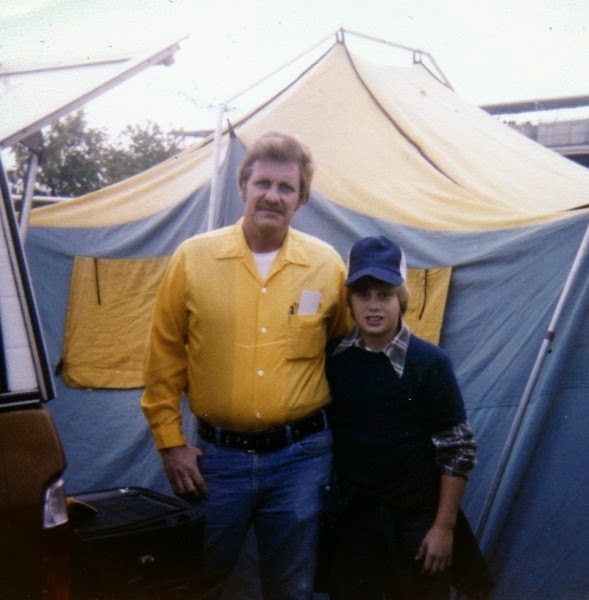 So just before 11 or so this morning when Jim Nabors sings "Back Home Again in Indiana" for the 42nd and final time I will be sitting in front of my TV crying, much as I am now.  Is it because I love Jim Nabors?  No.  Is it because I was born in Indiana?  No, I wasn't.  It's because as we grow older we seem to lose more and more of what we held dear and what we embraced and try to hold onto of our youth.  The end of an era.

My Dad won't be in front of the TV today, he died in 2009.  But I will be and I will think of him fondly and remember those moments in time.  "They're racing at Indianapolis!"


We got pounded by almost golf ball sized hail last night during a rather brutal thunderstorm.  Climate change my ass!  As always, Wil was there with camera and witty commentary. You can't see a lot but you can hear it and of course the narration is free.
2 comments: 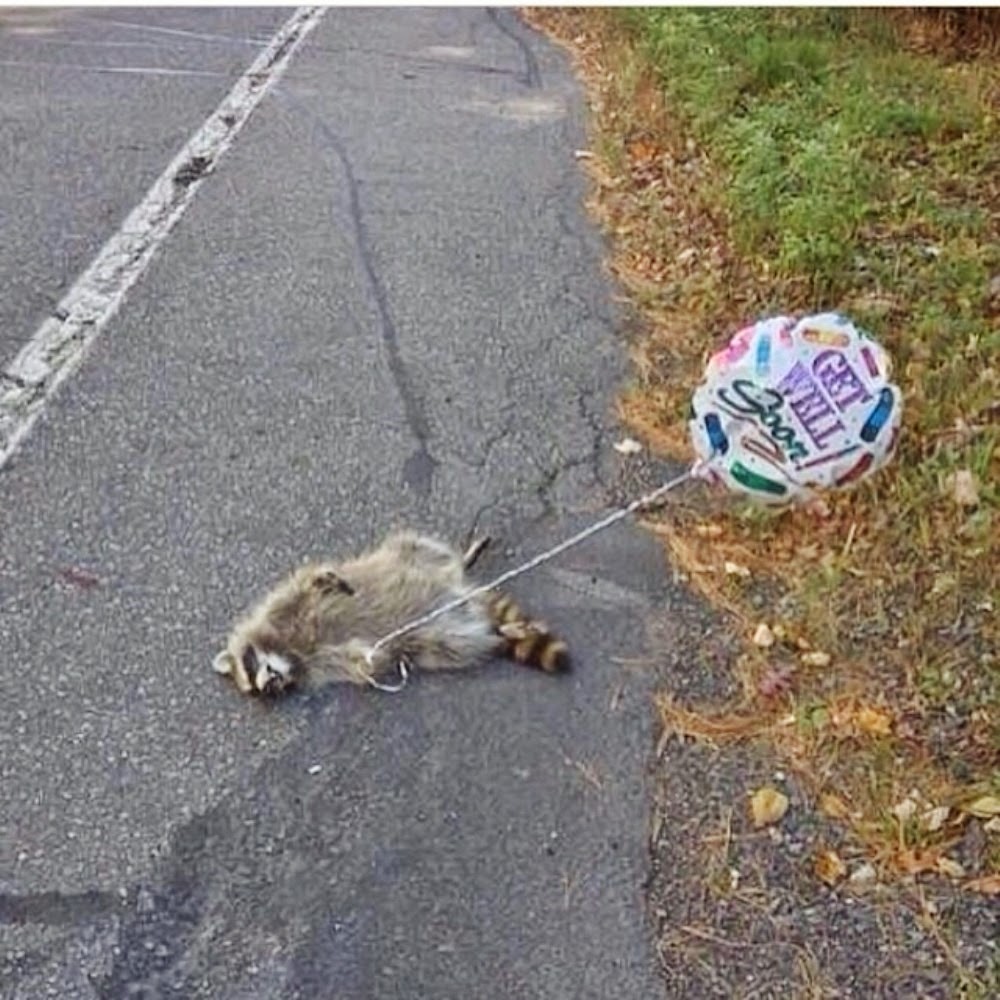 As soon as I saw this pic I LOLed big time.  This is so my sense of humor and so something I would do.  I had to share!

Also, GO BLACKHAWKS!  That is all.
No comments:

Looking through the pics folders, figured I'd post a few.  As always, click on the pic to really get a look at them, and shit. 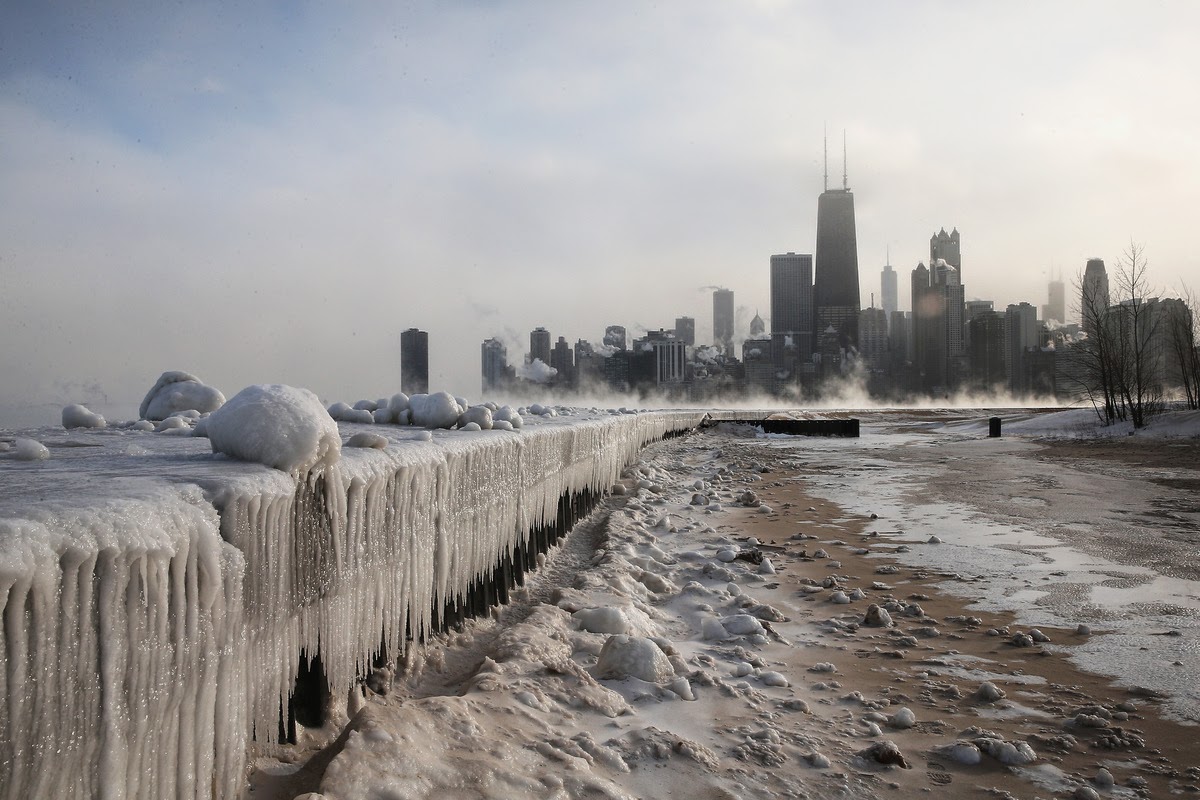 Chicago this past winter 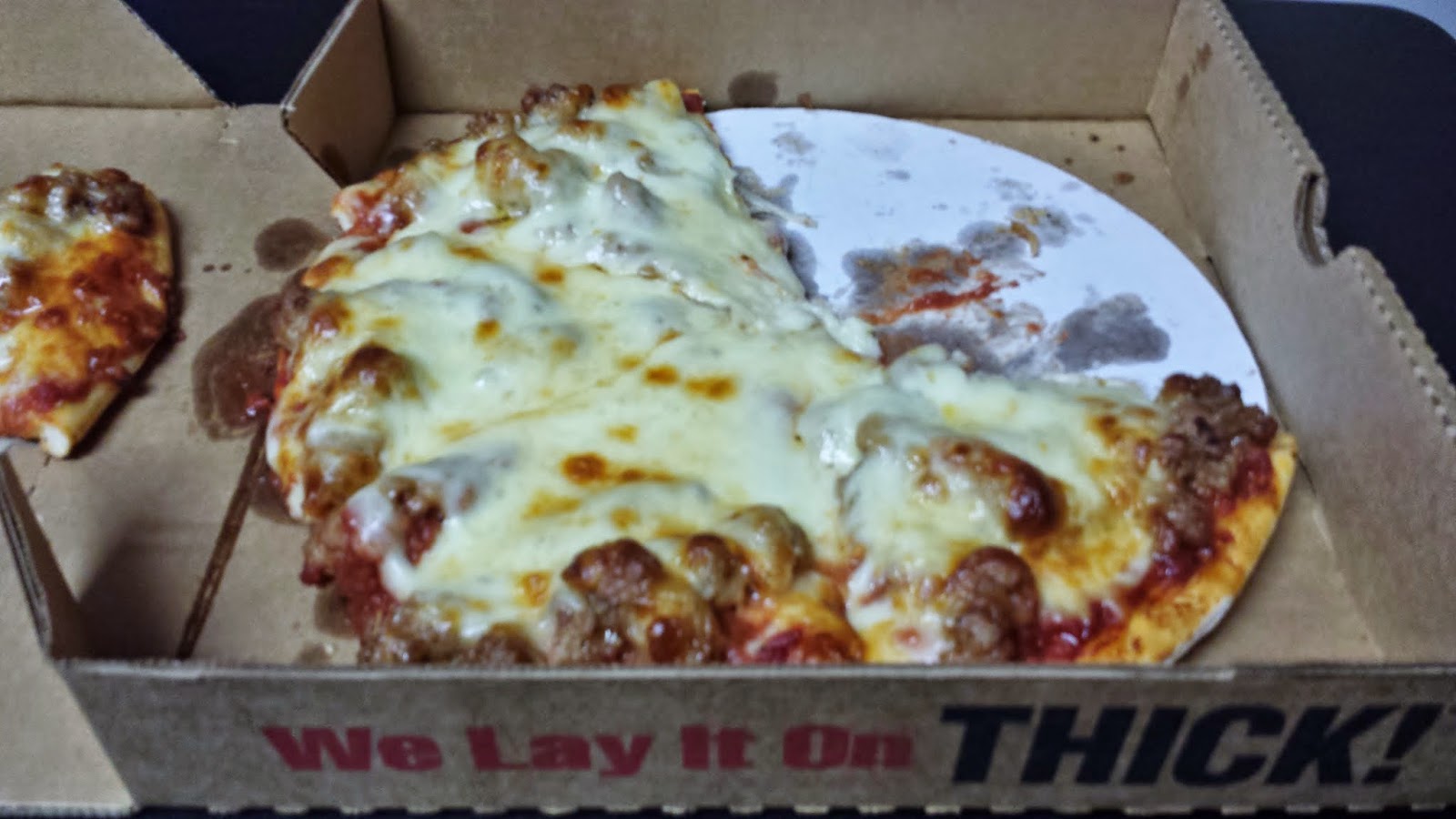 Got this from Beggar's the other night, might be the best pizza I've ever had, and I've had alot!  I actually called them up and told them how excellent it was.

For those that have always wondered, here's where The Commander resides.  Take the driveway to the right past the black Honda and there I is!  BTW, this pic was taken on a Tuesday.
No comments: 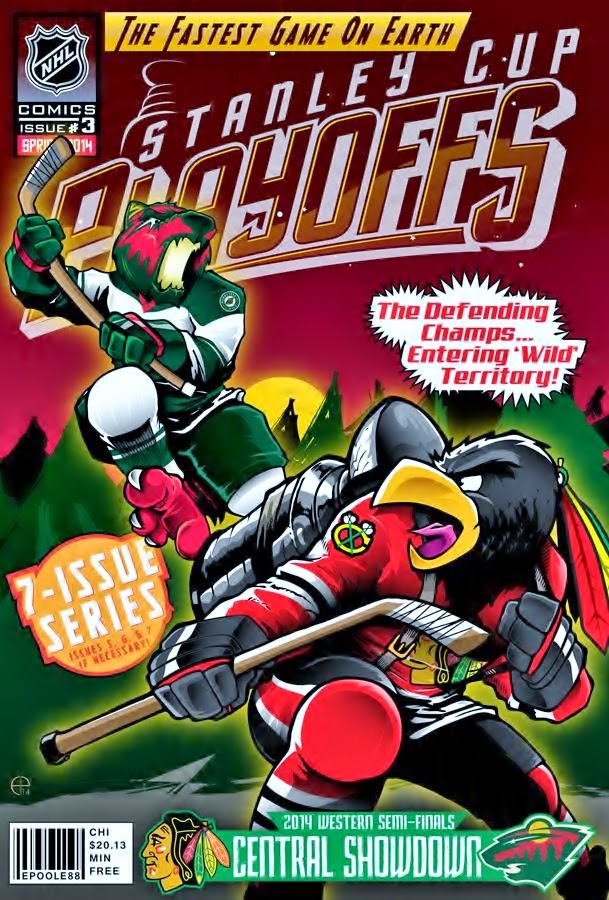 Game #4 is on tonight.  Blackhawks are up 2-1 in the best of 7 series.  Here's to victory tonight and closing this series out on Sunday.  GO HAWKS!
2 comments: 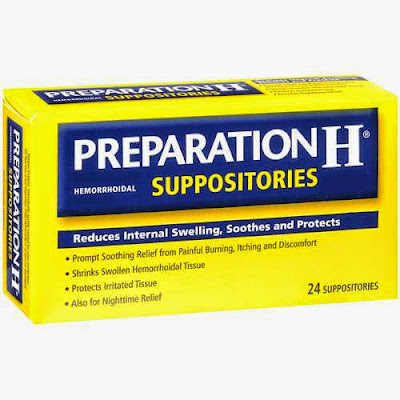 After yet another particularly painful and interesting "movement" this morning (for sharing, yes, you're welcome) I went out to The Smoking Area to recover and my mind fell into one of my usual comedic spells and started to wander. I began to riff on band names (ala The Illinois Entertainer) and came up with these and many more. Feel free to add your own.