Jesus, I sure am busy over here doing nothing.  I will do a proper update soon. Until then, here's some quick shite.

We have another storm coming this weekend.  We're expecting 4" to 6'.  Does it really matter anymore?

Saturday night or tomorrow as it were (that's twice today I've used that phrase, probably incorrectly),  the Blackhawks are hosting the Penguins in yet another outdoor game at Soldier Field.  You can kiss my arse if you think I would be going to that.  F-U.  I will be just fine here in My Lair watching it on the telly.

God Dammit!  I swear I haven't touched a single guitar in more than a week.  WTF!  Not like I don't have the time.  See, I could be doing that right now instead of this.

Got these the other day, I HIGHLY recommend this product. 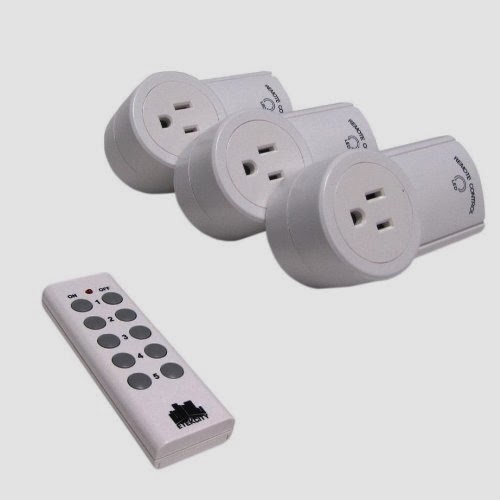 Also, after talking to my mate Colin, the other day I am looking forward to the upcoming racing seasons for IndyCar and F1.  IndyCar begins March 30 with The Grand Prix of St. Petersburg and F1 bows with The Australian Grand Prix on March 16!  I plan on trying to follow both closely this year.  Sorry, I don't do NASCAR.

Aight peeps, lemme go and do something else now.
No comments:


Yeah, it's really getting old.  We got another 8 inches or so today (oh yesth).  You can tell by my commentary that I'm losing my humorous demeanor, especially after an hour prior to this video I actually scraped the side of the garage backing into my hole. 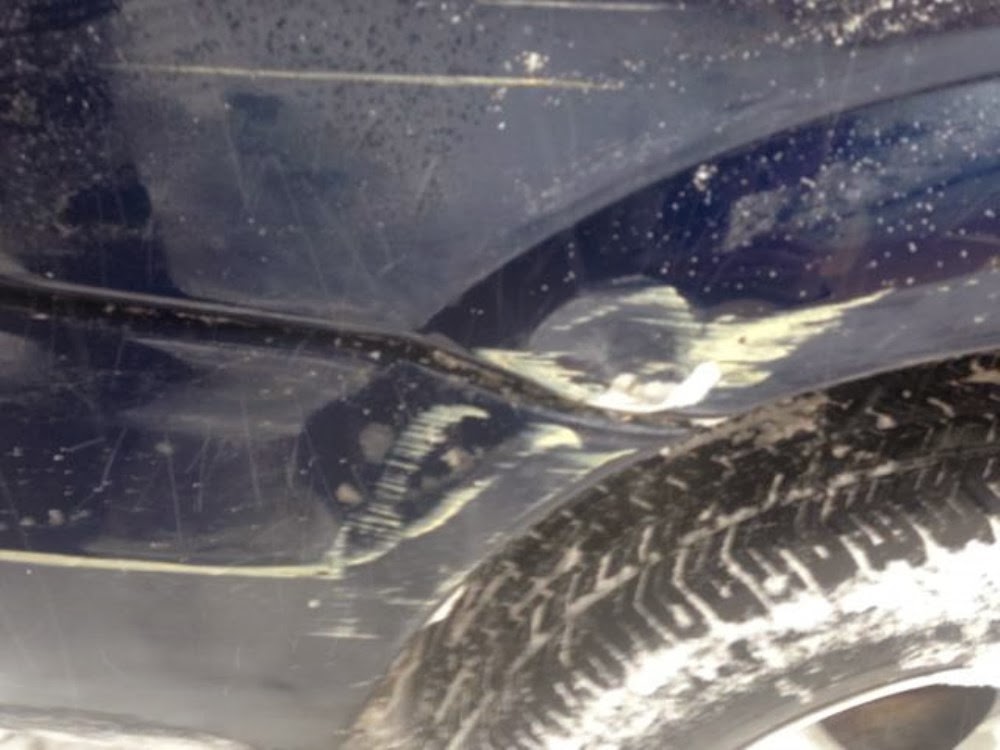 Been here 2 1/2 years and have never hit it and today I caught it by not even an inch.  GOD DAMN SON OF A BITCH!  Check out this next video that's in slow motion for comedic effect.

It seems to me the more years I spend on this planet the more people just seem to disappoint me and further reduce my already fading faith in mankind in general. And the thing is, it doesn't take much to appease me, I'm not asking for the world here. I'm talking about basic kindness and consideration and that kind of stuff. It amazes me how many people just can't be bothered or plain just don't give a shit when it comes to even the most mundane or rudimentary acts of manners or consideration.

Now what forces me to pen this little rant is nothing Earth shattering. I was not wounded physically or otherwise. I pride myself on being a decent person that knows when to say "thank you" or "please", etc. I also am the kind of person that if I tell you I'm going to do something that in some way involves you, I will do it. And if for some reason I can't do it or am delayed I will keep you abreast of the situation. Let me just finish my preface and disclaimers here and tell you this is no crime against humanity, just another annoyance that makes me shake my head. Anyway, you get my gist, I'll get on with the story. 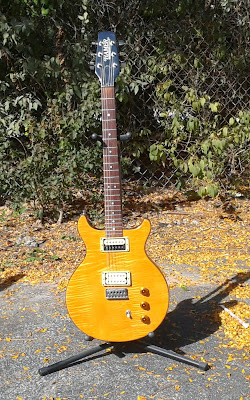 A week or so ago I was sitting around The Lair and decided that maybe I would sell off one of my guitars. As most of you know I currently have 10 of them, 5 of which are deployed in the multi-stand for regular play and the other 5 have been relegated to the closet due to the fact that I don't really play them a lot and I don't have the room to just display them. One of the closeted is my 1980 Hamer Special shown above. It is a fantastic, all original guitar that is actually the first one I bought just about 4 years ago that set me off on my collecting blitz. Since that time I've bought 9 and sold 1. Yeah, it's been a lot of fun. After all the dust settled I've gotten a good feeling for what I like and what I don't. I've always been a Fender Stratocaster man and it seems I can't shake it. I currently own 3 and have owned 3 others in my lifetime. They just feel right to me. Now anyone that knows guitars knows a Hamer and a Strat are on totally opposite ends of the spectrum, they are nothing alike.

So I put an ad on Craig's and in my guitar forum that I visit often. I put the Hamer up for sale at $925 shipped or trade for an American Stratocaster. I got a couple of early bites that went nowhere and then I got an email off of Craig's from a guy interested in trading me a 2012 American Special Stratocaster. Now the "American Special" is the lowest grade out of 4-5 levels of American Strats, it didn't even come with a case new and sold for approx. $800 or so. Knowing my Hamer was worth more I told him I would think about it. The guitar he was offering just didn't grab me but it was decent and as I know my Strats I could tell by the serial number it was also a 2010. No big deal, just kind of makes you wonder when people don't know that. After pondering I email the guy back and tell him that his guitar is worth maybe $650 tops and mine could sell on eBay all day for the very least $800, would he be willing to throw in some cash to make the deal?  He responded quickly saying he would and I told him let me think about it, I'll get with you tomorrow.

Tomorrow comes and I'm just not feeling it so I write him an email and tell him I'll pass.  A couple of days later I'm thinking about it and decide that maybe I would open up the trade possibilities to include a Telecaster.  I've never owned one and wanted one so why not?  I amend my Craig's ad to include this and even drop the price to $875.  Low and behold I get a response just a few hours later... from the same guy.  Now he's got a 91 USA Telecaster in excellent shape that oddly enough he wants $875 for.  The guitar looks pretty good but a couple of things quickly catch my fairly knowledgeable eye.  For one, there's a number missing from the serial number if it's a 1991.  Also, the truss rod plug looks in the pics he sent to be black which was done on Made In Mexico Fenders, not on American Fenders which the plug is Walnut.  Red flags!

After investigating for while I decide that it just isn't worth pursuing, I don't want it that bad especially not knowing for sure exactly what I would be getting.  I'll send him an email in the morn and let him know.  The next morn before I can even send a note, he emails me telling me he's willing to just buy it outright.  I tell him my rock bottom price is $800 since I don't have to bother with shipping and such.  He emails right back saying $750 in cash today.  I ponder for a minute and say what the hell, he seems to REALLY want it and and he's gonna have to come and pick it up and all that, let's do a deal.  I email him right back and tell him it's a deal due to his persistence and it will be going to a good home and all that BS.  Yes, I actually care.  I give him my celly number so we can hash out the details.  He returns my email saying he would call me in a bit.

That was 11:30 yesterday morning.  At 9:00 tonight I figured I'd email him.  Maybe somehow all of his emails were deleted and he lost my number.  Maybe he dropped his phone in a toilet or a river.  Maybe he was killed in a fiery crash!  Hey, benefit of the doubt and shit.  So I shoot him an email saying verbatim: "So, do we not have deal then?  Have you changed your mind?"  That's it.  Not 10 minutes later I get a reply:  "Bought a Les Paul yesterday.  Still interested but need to wait a week to reload cash.  I (sic) email you then.  Thanks".  Yeah.

So here's my rub.  I would feel like total dickhole telling someone I'll call them in a bit and then never calling them.  Especially if I was the spirited pursuer in this dance.  And do you think it would be too much to say "Sorry, I bought a Les Paul..." or "Sorry I didn't get back to you...".  WTF!  Now I know what you're thinking out there.  Oh Wil, get over it, it's not a big deal, blah, blah, blah.  But it is a deal, if not a big one.  It just seems the more I deal with people the more I seem to run into this kind of apathy.  Needless to say I'm not gonna sit around waiting for an email, lolz.

I once had a girlfriend say, "I just don't like people in general".   I'm really starting to understand what she meant by that.

UPDATE - During my investigation I sent the Telescaster's serial number to Fender Customer Service.  FCS will tell you all the info on a guitar like original colors and hardware etc.  The serial number I sent them off of this guy's (alleged) 1991 3-Tone Sunburst American STD Telecaster came back as this:

"Our records show that this serial number is to an American Deluxe Telecaster In Teal Green Metallic, completed November of 1999. Based on the parts list, this should have a walnut truss rod plug."

Huh, big difference there. Rock on all you (good and decent) people!
3 comments: 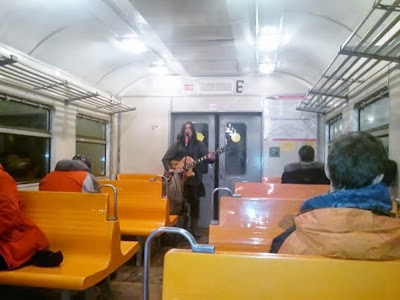 Starting a new job tomorrow, wish me luck! I wonder how well "Sweetleaf" will go over? Probably better for the afternoon commute than the morning.
1 comment: 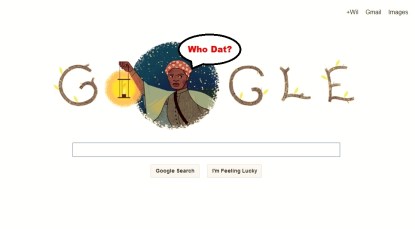 When I went to Google the other day and discovered it was time again for Black History Month as it is every February and I saw the Google tribute graphic I just couldn't help myself.  It was just too easy, I had to.
No comments:

I So Want This! 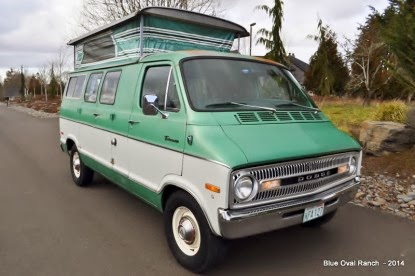 I've got to get my hands on this bad fella. Now that's traveling in style there! Check it out here: 1971 Dodge Tradesman 200 Camper
No comments:


Hanging out in the parking lot waiting for my nephew to come out of work I figured I'd rock it out a little bit and film a bit of the never ending snow removal. The winter hilarity continues!
No comments: