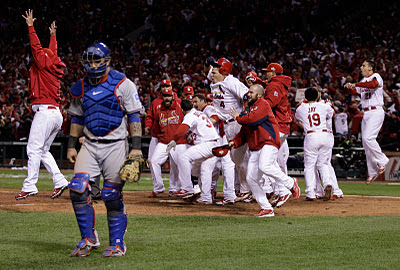 Congratulations to the St. Louis Cardinals on their 11th World Series Championship last night, defeating the Texas Rangers in 7 games. This was truly a hell of a series that I think really came down to the Cardinals taking advantage of every Texas mistake. I have to admit, I didn't know St. Louis was that good but they just kept coming (Game 6!) and never gave up. I don't think there's a team in baseball that could have beaten them in this series. I was rooting for Texas in this series cause I would liked to have seen them win their first championship, especially since they came so close last year losing to the San Francisco Giants. I'm also an American Leaguer to begin with. In the end this is a series that will be talked about for a long time and deservedly so.

Also in sporting news last night, the Blackhawks just totally sucked. There wasn't a single player in an Indian Head sweater that looked like they knew what the hell was going on as they fell to the Carolina Hurricanes 3-0. Corey Crawford did the best he could to make 30 saves on pucks that seemed to be coming from every angle and everywhere last night. This was definitely the worst game I have seen them play so far in this young season and I am hoping it is the worst game I see out of them all season. Tonight they return home to host a hungry, desperate Columbus Blue Jackets squad so we'll see which Hawks team we get tonight. 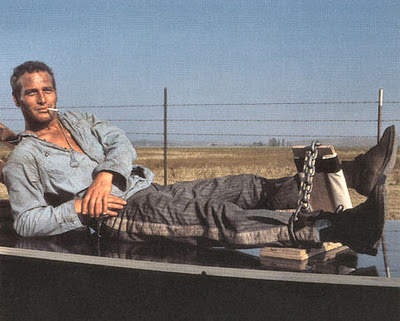 In local news, I sat here and watched all of "Cool Hand Luke" early this morning on TV. I don't have to tell you how good of a movie this is/was. And what a cast of late 60s - early 70s icons! Paul Newman, George Kennedy, Joe Don Baker, Harry Dean Stanton, Dennis Hopper, etc. If you've never seen this movie, it is truly one of those must-see movies. Especially if you like a good car wash.